Selinari monastery and her legend.

Concerning the selinari monastery and her little church there is a legend that tells about a sheep shepherd who, during the Ottoman Turkish occupation, wanted to rest in a cave. There he found a very special icon of Agios Georgios. He took it to keep it in the first church he came across.

The next day, when the Shepard went back to the cave, he found another icon of Agios Georgios. When he took this icon to the same church his find of the previous day appeared to have disappeared. The icon had returned to the cave. The shepherd thought this was so special that he decided to leave the icon in the cave and built a church around it. 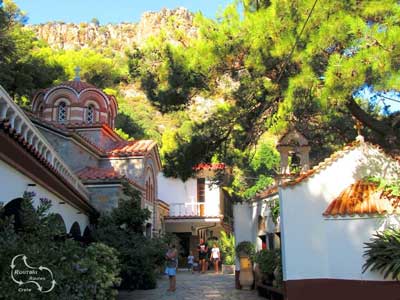 However this was not allowed by the Turkish occupiers in that time. Yet the shepherd started the construction of the church. When the Turks found out, they tried to stop him, which ended in a shooting. To protect himself the shepherd held the icon in front of his chest. Two bullets missed the body of Agios Georgios which was painted on the icon en therefore also the body of the shepherd. But the third bullet hit the saint on the icon and would have killed the shepherd, yet bounced back and instead killed the Turk that fired the shot. 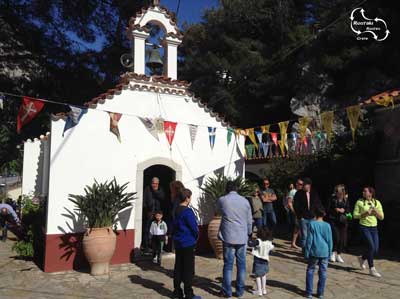 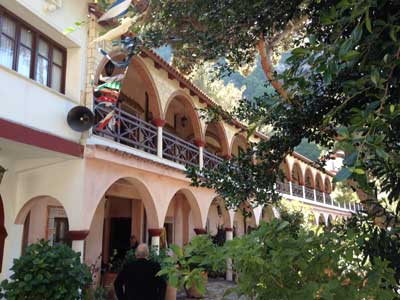 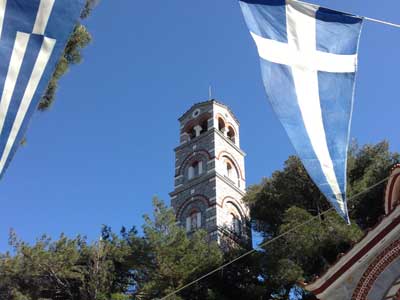 The name of the Selinari monastery comes from Selina = the moon.

The church within the walls of the monastery has been named after the icon; the Agios Georgios church. It only seats fifteen people. To be able to hold more visitors they built a patio around the church. In the mean time they also built an old age home next to it, which is inhabited by monks.

Agios Georgios is the patron saint of traffic.

Agios Georgios is the patron saint of all road users. That is the reason that many Greeks make a cross when they pass the church. Especially on Sundays a lot of Greeks visit the church to have a look at the icon, which has indeed two bullet holes.

Most pictures on the this page are taken on the 23 of April, the name day of Agios Georgios. A crowded day around and in the monastery. The icon is placed outside and visitors are able to kiss the icon. Along the main road are several market stands placed where visitors are able to buy all kinds of presents and goods. 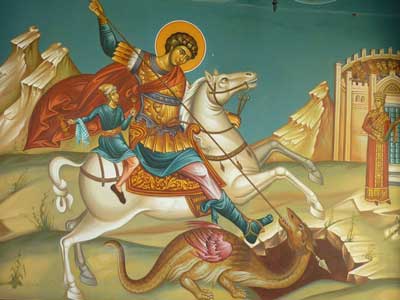 A final anecdote about the church; during the second world war the Germans wanted to rob the church empty. One of the Germans objected because he was a faithful man himself. This didn’t stop the other members of the group from taking the treasures anyway, but not even a few kilometres further the Germans died in a car crash. The only survivor was the German that objected to robbing the church. This gentleman has been returning to Crete for many years and visited the church on that certain day. 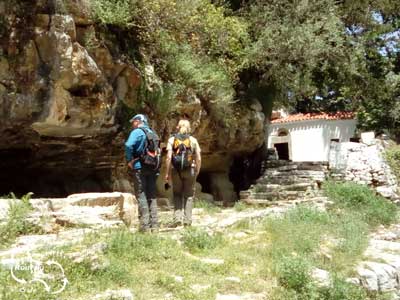 Visit the Roman graves and the ‘five holy virgins’ church in route 32. 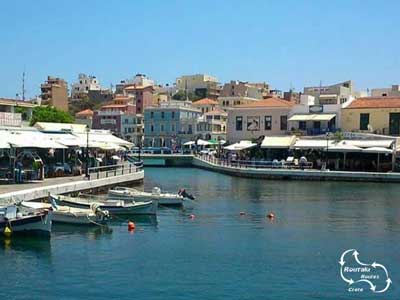 Scroll around the Voulismeni laki in Agios Nicolaos in road trip 58. 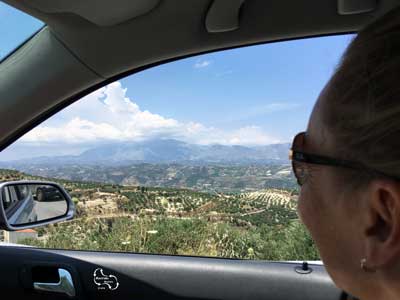 Enjoy the amazing views over the vineyards driving Routaki route 59.

We use cookies to ensure that we give you the best experience on this website. If you continue to use this site we will assume that you are happy with it.Ok
Go to Top